• … while several new contracts are expected to boost revenue

CoreCivic’s (NYSE:CXW) 2Q21 results mirror improving trends in its core operations, as occupancies rebound, although occupancies have still not recovered to pre-COVID levels. The lower occupancies reflect ongoing government and ICE measures to curb the spread of COVID-19 among prison and detainee populations. CXW’s average compensated occupancy for the Safety and Community units was 71.6% compared to 74.9% in 2Q20, but up sequentially from 69.9% in 1Q21. The quarter-to-quarter improvement notwithstanding, with cases on the rise in many areas of the country and emerging variants of the virus, the company expects the COVID-19 pandemic could continue to impact utilization levels of CXW’s facilities in the near-term.

Revenue of $464.6 million was down 1.7% year-over-year. This decline primarily reflected lower occupancy rates noted above, as well as the recent divestiture of assets. Revenue from recently signed contracts partially offset these factors. With only one prison contract with the Bureau of Prisons (BOP), which accounts for only about 2% of total revenue, CXW has minimal exposure to the executive order to not renew DOJ contracts with private operators. Conversely, contracts with the U.S. Marshals Service (USMS) represent about 23% of CXW’s annual revenue and CXW expects USMS need to remain relatively steady.

Despite the slight revenue decline compared to the same period in 2020, adjusted EBITDA was $101.7 million, up from $101.1 million in 2Q20. Normalized FFO, excluding non-recurring items, was $0.46 per share compared with $0.56 in 2Q20. However, the company is now structured as a C Corp. and was structured as a REIT in 2020 and the decline in FFO reflects the tax impact from CXW’s conversion to a taxable C Corp. On an apples-to-apples basis, normalized FFO of $0.46 per share was down only slightly from pro forma 2Q20 $0.47 per share, after applying a tax rate of 27.5% to last year’s 2Q FFO.

The company has sold several non-core assets over the past few quarters, consistent with its objective to focus on the core business and strengthen its balance sheet. Recent asset sales helped accelerate debt repayments. Long-term debt declined to $1.48 billion from $1.75 billion at year-end 2020, through the combination of cash flow generation and proceeds from asset sales. The total leverage ratio was 3.3x TTM adjusted EBITDA, down from 4.3x at the end of 2Q20. CXW targets a leverage ratio of 2.25x to 2.75x. CXW had $162.9 million of cash at the end of 2Q21, plus an additional $8.9 million of restricted cash and about $688 million available under its $800 million revolver. Recent refinancing measures enabled CXW to extend the weighted average debt maturity from 5.3 years to 6.0 years. Moreover, the company now has no major debt maturities coming due before 2023.

Several recent contracts and renewals and potential new ones coming up are expected to help offset the decline in occupancies and revenue caused by the pandemic. For instance, ICE has notified CXW that it intends to exercise its renewal option to extend a contract that was set to expire in 3Q21 at the Elizabeth Detention Center through 3Q23. Over the past decade or so, contract renewals have averaged over 90% per annum. This renewal rate has been steady regardless of the administration in office. We anticipate that it will remain steady in the foreseeable future, as government entities need to house prison populations and also face budgetary issues that likely constrain construction of new facilities.

SUBSCRIBE TO ZACKS SMALL CAP RESEARCH to receive our articles and reports emailed directly to you each morning. Please visit our website for additional information on Zacks SCR.

DISCLOSURE: Zacks SCR has received compensation from the issuer directly, from an investment manager, or from an investor relations consulting firm, engaged by the issuer, for providing research coverage for a period of no less than one year. Research articles, as seen here, are part of the service Zacks provides and Zacks receives quarterly payments totaling a maximum fee of $40,000 annually for these services. Full Disclaimer HERE.

HR-software startup Personio has more than tripled its valuation in 9 months, to $6.3 billion, as 2021 deal sizes boom

Hanno Renner, the CEO and founder of Personio. Personio Personio, an HR-tech firm, is one of Germany's most valuable startups after raisin… 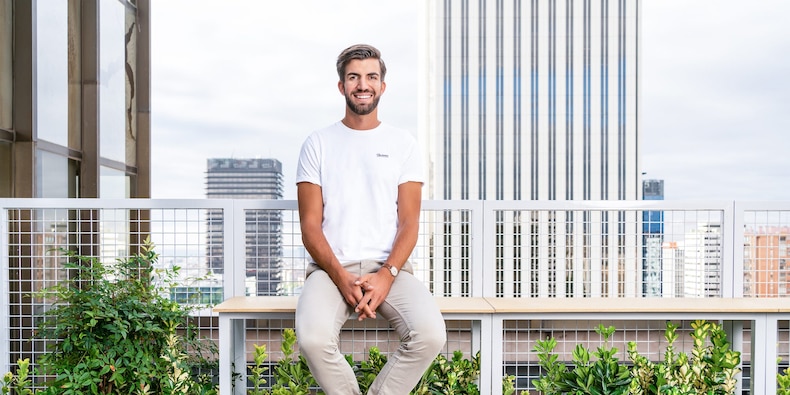 Hanno Renner, the CEO and founder of Personio.

Personio, which provides human-resources software for small and midsized businesses, more than tripled its valuation, to $6.3 billion, in a new funding round.

Founded in 2015 by Hanno Renner, a former yacht skipper, Personio helps companies manage staff and resources through its platform.

Personio last raised $125 million in January 2020 at a $1.7 billion valuation. Its $270 million in fresh Series E funding came from Greenoaks Capital Partners with participation from Altimeter Capital and Alkeon Capital.

“If you’d asked me about fundraising four weeks ago, I would have said we have plenty of capital and don’t need to raise again,” Renner told Insider. “I took a couple of meetings with this group of investors on the recommendation of another founder, and they were keen to invest. These are the right type of investors to bring on board because they will be with us for the long term, as we eventually go public and beyond.”

The deal takes Personio to about $500 million raised to date and makes it Germany’s second-most-valuable private tech startup, after Trade Republic.

Much of the new funding is set to go toward the company’s new product called people workflow automation, a tool to help stitch up data from fragmented departments within a company to avoid delays. Renner cites hiring as an example where a candidate’s acceptance documentation sit with an MD rather than with a company’s HR department. Personio’s platform can automate the process of ensuring the right forms are in the right place at the right time, he said.

“We’ve worked with more than 5,000 companies in the past six years and seen how some of these processes span beyond traditional HR, so we want to help our customers more,” Renner said. “Investors were so excited by this, so want they wanted to invest at a higher valuation than January.”

The Personio deal coincides with a spike in the median deal size globally for startups operating in HR technology, according to PitchBook data: The median post-money valuation is about $28 million this year, more than double 2020’s figure of $11 million.

Personio has expanded its footprint in recent years and now has about 1,000 staff members across offices in Munich, Madrid, Dublin, London, and Amsterdam. Alongside the development of its automation tool, funding will go toward expansion into new markets like France and Italy and hiring thousands of people in the coming years, Renner said.

The SEC is taking a hard line on stablecoins right now – but it could permit more coin issuers if it gets to regulate them, a financial policy expert says 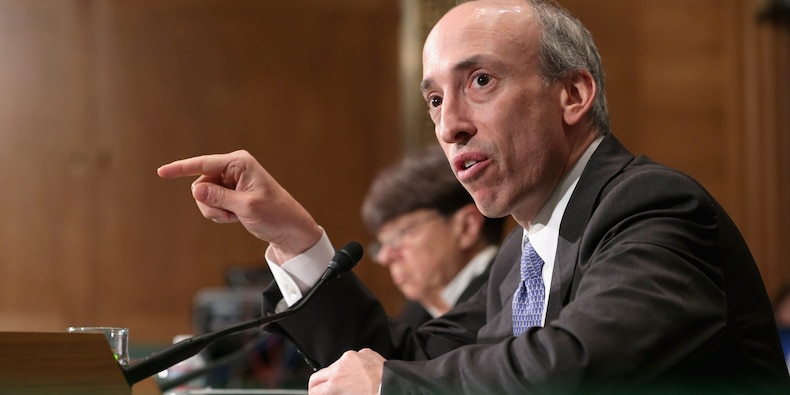 The Securities and Exchange Commission is taking a hard line on stablecoins right now – but if it ends up regulating the asset-backed cryptocurrencies, that could mean a far greater range of these coins on offer.

That’s the view of Jaret Seiberg, a DC-based financial services policy analyst at Cowen, who noted the government agency has a tough rival for the oversight role.

“We see a fight brewing between the Federal Reserve and SEC over which will regulate stablecoins,” Seiberg said in a note this week.

The boom in crypto assets’ popularity over the past year has regulators training their sights on potential risks to investors and to the financial system.

Gary Gensler, chairman of the SEC, has likened stablecoins to “poker chips” at the casino in the “Wild West” crypto market. Stablecoins are cryptocurrencies backed by fiat money such as the US dollar, or by traditional assets with stable value.

Tether and Circle, the two biggest stablecoins by market capitalization, have taken regulatory heat recently, with the SEC issuing an investigative subpoena to Circle this summer.

Gensler and Fed Chair Jerome Powell were among top officials – including Treasury Secretary Janet Yellen – who hinted at tightening the rules around stablecoins when they met to discuss tether in July.

The SEC boss has said some stablecoins may well be securities. Meanwhile, the Fed chief has said stablecoins are like money market funds, or bank deposits.

If the SEC wins the fight for oversight, it would treat stablecoins like prime money market mutual funds, or MMMFs, which come with liquidity requirements and redemption limits, according to Cowen.

“We believe there will be a greater diversity of stable coin issuers if the SEC prevails. Many entities from asset managers, to banks to securities firms could be issuers,” Seiberg said.

The Fed will take a bank-regulatory approach, according to Cowen. Stablecoins would become another deposit product, with the usual bank rules and Community Reinvestment Act obligations.

“If the Federal Reserve wins this fight, then we expect big banks to have the advantage when it comes to stable coin issuance,” Seiberg said.

The Biden administration appears to support the Fed’s approach, as it has been pushing Congress to create a bank-like charter for stablecoins. It has urged the Financial Stability Oversight Council to look into stablecoin-related risks to the financial system.

Cowen expects the FSOC to deem stablecoins “systemically important,” paving the way for the Fed to oversee them like banks. The central bank has a key ally in Yellen, a former Fed boss who now chairs the FSOC.

“This is not the first power struggle between the two. They fought in the 1990s to be the umbrella regulator of financial firms. The Fed won that battle,” Seiberg said.

Cowen believes the SEC has the edge because the markets regulator is seen as having the simplest path to bringing in a regulatory regime.

“The FSOC process has been cumbersome, and Congress rarely acts,” Seiberg said about the Fed’s path.

By contrast, the SEC may be able to treat stablecoins as securities, clearing the way for rules like those for money market mutual funds.

Whichever way it goes, there’s little real difference for stablecoins between the two regulatory regimes, according to Cowen. Either would boost confidence.

“To us, both options should reassure investors that stablecoins are fully backed by US dollars. That should limit the risk of a run,” Seiberg said

Read More: These 20 stocks are set to grow earnings by at least 20% in 2022, Goldman Sachs says – even as broader market growth slows and taxes rise 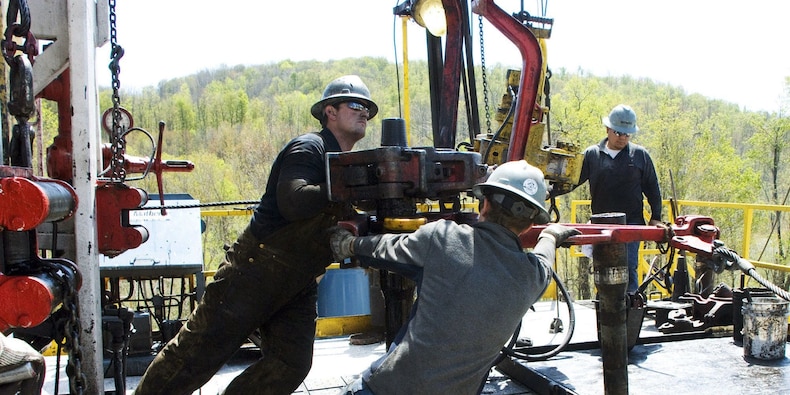 Brokers and exchanges are telling major commodity trading houses to deposit hundreds of millions of dollars in extra funding to cover their exposure to surging gas prices, according to a Reuters report on Monday.

A margin call occurs if funds in the account fall below the minimum margin requirement, which Reuters said, in this case, is 10% to 15%.

Trading firms have made big bets on natural gas produced and exported from the US by signing long-term contracts to buy cargoes of liquefied natural gas (LNG). The contracts are mainly designed to export gas to Europe and Asia and some contracts run through 2041.

“While there have been margin calls associated with the European natural gas price rally, Gunvor maintains a healthy liquidity position and instruments to manage any further volatility,” a company spokesperson told Reuters. Glencore, Trafigura and Vitol declined Reuters’ request for comment.

In order to hedge against price differences between physical gas in the US now and the rest of the world in the future, traders need to sell short positions in the European and Asian gas futures markets. Traders create short positions by selling a gas futures contract with the aim of buying it again later at a lower price.

But Reuters said the strategy backfired last month when European gas prices surged on a range of factors including low inventories and high demand in Asia. The front-month Dutch TTF gas contract, a European benchmark, has soared by nearly 400% since January.

The margin calls have led some smaller companies, in particular, to increase borrowing, eating into their cash available for trading and potentially pressuring their profits.