INTRODUCING INANNA: A Woman-Led Cannabis Manufacturer is Online and Ready to Service the California Market

I wish I could hear Nancy, her volume is literally half everyone else’s

Research Discovers That Cannabis Was Domesticated in China 12,000 Years Ago

Research Discovers That Cannabis Was Domesticated in China 12,000 Years Ago: Originating from northwest China, it was used for clothing and medicine.

Research conducted by the University of Lausanne has just determined that cannabis was domesticated as early as 12,000 years ago in China.

With the help of scientists in Switzerland, Britain, India, Pakistan, Qatar and China, the findings were published in the Science Advances journal, where 110 genomes comprised of anything from feral plants to modern hybrids were identified. It was determined that China has been using Cannabis for millennia in its textiles as well as for medicinal and recreational uses.

“We show that Cannabis Sativa was first domesticated in early Neolithic times in East Asia and that all current hemp and drug cultivars diverged from an ancestral gene pool currently represented by feral plants and landraces in China,” the report read.

Cannabis, at the time, was split into two categories for different uses — tall unbranched hemp plants that would yield more fiber material from the main stem, and short plant marijuana with more flowers for resin production. The findings went on to state, “Contrary to a widely-accepted view, which associates cannabis with a Central Asian center of crop domestication, our results are consistent with a single domestication origin of Cannabis Sativa in East Asia, in line with early archaeological evidence.”

DISCLAIMER: We discourage illegal cannabis consumption. Please be mindful of your local rules and laws on the use of marijuana.

What to Read Next

Proof that the species was capable of symbolic expression.

Named after the “God of Chaos.”

Found only in those who grew up playing the video game.

Look back at the rise of the MCU.

“If u don’t like me doin this or anything I do, please don’t buy my albums, don’t come to my shows.”

Less than a year after its release.

Some sneakerheads exploited a loophole.

Raising funds to rebound from the pandemic and for potential acquisitions.

From Cannetille gold and silver thread-embroidered Saddle Bags to hand-painted berets and more.

“Sunscreen” is the only scent you’ll want to wear when it’s warm.

Identified as a “games-concerned personnel.”

Congress is closer than ever to legalizing weed — and the leader of the Democratic-majority U.S. Senate says he’ll use all of his political power… 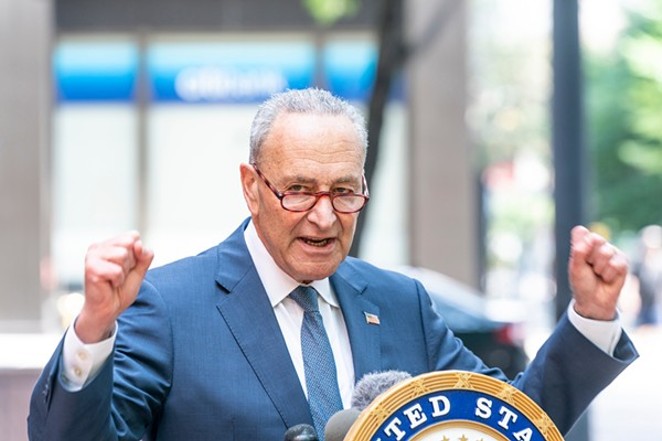 Congress is closer than ever to legalizing weed — and the leader of the Democratic-majority U.S. Senate says he’ll use all of his political power to make it happen.

“I am the first majority leader to say it’s time to end the federal prohibition on marijuana and as majority leader, I’m going to push this issue forward and make it a priority for the Senate,” Schumer said Thursday, according to The Hill.

On Wednesday, Schumer introduced the Cannabis Administration and Opportunity Act, which would legalize marijuana by removing it from the Controlled Substances Act, allowing for it to be taxed and regulated.

The bill would allow financial services such as bank accounts and loans for legal cannabis businesses. Even though many states, including Michigan, have legalized marijuana for recreational use, it remains a Schedule 1 banned drug in the eyes of the federal government, which can put many legal businesses in hot water when it comes to banking.

The proposed legislation would also immediately expunge the criminal records of people with low-level marijuana offenses.

Sen. Corey Booker of New Jersey and Ron Wyden of Oregon, both Democrats, are sponsors of Schumer’s bill.

“At long last it would take steps to right the wrongs of the failed war on drugs,” Schumer said.

The federal proposal comes as other states blow past Texas in legalizing weed for personal use and widening is medical availability. At present, 18 states and Washington, D.C. have made it legal for recreational use.

During its most recent session, the Texas Legislature expanded the state’s “compassionate use” program to include people with cancer and post-traumatic stress disorder. However, it stopped short of allowing usage by people with chronic pain, a setback to weed proponents.

A version of this story first appeared in Detroit Metro Times, an affiliated publication.

Stay on top of cannabis news and views. Sign up for our Weed Wire Newsletter.

SEC Commissioner concerned about the US lagging behind global Bitcoin ETFs